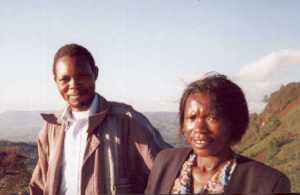 In December 2000, Sarah and I flew to visit Pastor Anthony and his wife Josephine, who had organised a conference in their church, in Nakuru, in the uplands of Kenya, inviting me to teach on the subjects of Prayer, Intercession and Overcoming Powers of Darkness.

Neither Sarah nor I had ever visited the African continent before. As our plane began to descend into Bujumbura airport (in Burundi), en route to Nairobi, a loud piercing, grating noise was emitted along with sparks of white light which could be seen out of the left hand side windows. An electrical fault? Something exploding from within the hold? People speculated about these things, as the plane came to rest safely and passengers for Bujumbura disembarked.

Gradually, however, we began to realise however that all was not well. A doctor was requested and we could see people crowding around someone in business class. Still no explanation was forthcoming from the flight attendants. After more speculation, I decided to take a look in business class and see what had gone on. Then it was obvious: bullets!

The plane had been shot at with machine gun fire as it descended for landing. Thankfully, no-one was seriously hurt.

(Photo: The stricken SABENA plane, shot down as we descended into Bujumbura airport. Someone said: SABENA is an acronym for Such A Bad Experience Never Again — it was  true for us, this aircraft and the airline itself, which went bust soon after this incident.)

The gunmen had been aiming at the cockpit but failed to penetrate it. Did they know that a member of the ruling tribe’s royal family was on board? We don’t know. What we did find out was that there were several other Christian missionaries on board with us.

We also discovered that God had gone ahead of us and protected us: in the morning of our flight, just as we were leaving home, the Holy Spirit spoke a scripture reference into Sarah’s heart: Isaiah 54. Short of time, she wrote it upon her hand. As we waited upon the aircraft, she was reminded of the scripture.

Turning to it she read the following promise:

No weapon formed against you shall succeed.

Eventually we were led off the aircraft and into the airport building, surrounded by military personnel sporting various kinds of weapons. Then, under the cover of darkness, we were escorted by the military, in open-topped vehicles, to a hotel about five miles from the airport — where they proceeded to take our passports from us (something we found scarier than being shot at!)

As night drew in, having made a phone call to the UK, we began to relax and enjoy the surroundings, especially the pervading “sound of Africa,” which continually invaded the night- time air: cicadas! The next day we awoke to a scene of lush, green tropical plants, African sunshine and a tempting blue swimming pool.

No time to enjoy the pool though, we were immediately whisked to an early breakfast and then the airport. Not until the early afternoon could a plane from Kenya airways be persuaded that it was now safe for them to land. We finally arrived at Nairobi airport and met Anthony and Josephine, when for the first time they found out why we had been delayed for over 15 hours!

On our journey from Nairobi, we then survived two punctures and one very challenging episode when our taxi ran out of fuel, in the middle of what we were reassuringly told was ‘bandit country’, leaving us ‘parked’ precariously on the side of an unlit highway, with huge lorries weaving in and out of potholes, thundering upon us, threatening to kill us if the bandits didn’t get us first!

Notwithstanding these challenges, we arrived, grateful, excited and exhausted all at the same time, at our intended destination of Nakuru at 11pm on Tuesday 5 December.

Our conference was scheduled to begin on Wednesday morning…

Over the course of five days approximately fifteen hours of teaching was completed. The final seminar of the conference drew upon the story of Moses intercession on behalf of the Hebrew people, in captivity to Egypt, developing the idea of God’s judgement upon the false gods taking place in parallel to the human drama. It encouraged the attendees to consider the power that God makes available to those who are faithful to him. The gathering culminated in a time of prayer and deep intercession.

Extraordinarily, this coincided with a downpour of rain, beating loudly upon the metal roof of the wooden church building. Whereas the daily rain was typically lasting around twenty minutes and barely sufficient to get anything very wet, this downpour lasted a solid two hours. We felt God was confirming His word with a sign, when the following prophecy was given:

God wants to encourage us. He is sending this rain. One of the things which God has been saying to us this week, is that He is a real God, who acts in real time, with real people and I believe is testifying by sending this rain. In the word of God, Deuteronomy 28 and 29, God makes it clear to us that there is a curse associated with a lack of rain and it says in 28:12 that if you listen closely to what God says and observe and obey his commandments, then “God will open for you his good treasure, the sky and send the rain in it’s right season and bless everything you undertake. God will make you the head and not the tail, only listen to the Commandments of the Lord.”

I have been so much blessed with his conference, because I’ve been here since the beginning of the day, my life is not the same again. I’ve been interceding without knowing what I’ve been doing, now I thank God that through his teaching I’ve known who an intercessor is. So when a problem comes on my side I know what is happening, so I will not be at the back seat, I’ll beat it. because I know God is on my side.

 The meetings have been so good, and really blessed of the Lord. The topic that was going on yesterday, talking on revival. The way I had understood revival, it came in a very different dimension. And my mind was very much opened up. I was thinking of revival, in the area of power only. But through the man of God I came to realise about the zeal and the love of God, is the type of revival.

My intention was to attend at the first day, then continue with some other business. But when I came first day, I testify that there is anointing that was going on here. There was the anointing of love, and the anointing in the teachings, by Pastor John. So I thought I had to postpone every other business! And it has taken the hand of God to be here throughout this conference and I’ve not missed a single day!

George, a local businessman shared his own story with great excitement,

The Pastor started preaching, suddenly he spoke to my heart. He took me to I don’t know where! When I went back home, I told my in-law: today there was some preaching that really took me I don’t know where! But I feel I need more of that. Tomorrow the first thing I’ll do, I’ll go over there and listen to what that Pastor was telling me.

And surely I came today, again he did the same thing he did yesterday. He swept me over. No! I said today’s the day! To hand over my life to Jesus! And I’m so happy! Yesterday I wasn’t but today I am saved! What took me to make that decision especially… it’s exactly what I’ve gone through. It was painful to me, especially when I heard what he went through (in) his life with his family, his wife, because that’s exactly what I went through.

The final word went to Anthony,

I thank God so much because during those times, I had no idea if they would ever come to Kenya, especially to visit us and come to have a conference on intercessory prayer. You see God knitted our spirits together; there were times when we could go for over a year without corresponding, but later on God could just tell me to write to them. And they would write back.

And I began sensing in my spirit that they had to come over. That was even before we thought of coming to Nakuru. We tried to make arrangements for them to come, planning the months when they were supposed to come, but that was not fruitful. It took another two years, almost three years, when God fulfilled that desire. And I believe God particularly wanted them to come in Nakuru, because there’s something he wants to do here. And whatever has been done through the conference, it’s going to spread in all directions, the something that has happened in the heavenly places here, in this realm and God has released something of the supernatural. Especially those of you who have been here on this wonderful day. God is going to continue doing it!…

You’ll go through trials and have to face many conflicts, but God is still going to bring to pass what he has purposed to do in your life. So I thank God so much for enabling these dear ones to come over. It has been a good, a great encouragement to us, especially at a time like this, when we were almost giving up. We have received fresh oil! May God bless you so much. You don’t know what you mean to us! Only God knows!

Safari is a Swahili word meaning journey — and what a journey this whole experience was for Sarah and I: facing and overcoming all manner of trials and tests, discovering that I had gift for teaching, making friends and encountering Kenya and the East African Rift Valley—a dream of mine since childhood days.

We also found time for another kind of safari: venturing into Nakuru National Park, on the municipal bus! We took a very shaky video, but until we find some way to recover that from old tapes, here is a slideshow of scanned photographs that gives a flavour of our marvellous experiences of Kenya.

This site uses Akismet to reduce spam. Learn how your comment data is processed.